Home About us Our tradition 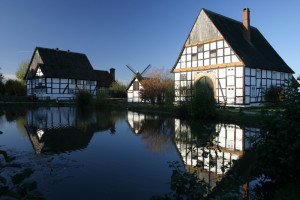 As one of Germany’s oldest bread varieties, Westphalian pumpernickel is steeped in tradition. What may well be the oldest pumpernickel bakery was established in the Westphalia region in 1570, with the recipe and method said to have come about by chance more than a century before. As a baker left to do battle during the days of the Soest Feud, he had his oven bricked up to keep looters out. The dough, however, was forgotten and left to cool slowly in the oven – and the baker only discovered the delectable bread (which was almost black in colour) upon his return. On account of its long shelf life, pumpernickel was often used as an important emergency ration during times of crisis and famine.

There is, however, much uncertainty surrounding both the roots and name of Westphalian pumpernickel. One of the most famous legends even attributes the name to Napoleon Bonaparte.

When stopping off in Westphalia during one of his many campaigns, he was served the dark, solid bread so typical of the region. For the French emperor with his somewhat delicate palate, the bread was simply too much of an acquired taste. He therefore declared it to be suitable only as food for his horse, Nicol. And, with the words C’est bon pour Nicol, he ordered the bread to be fed to the animal. The locals seized on the expression, as they didn’t actually have a name for their wholegrain, wholemeal bread with its tangy flavour. As time went by, Napoleon’s bon mot gave rise to the name ‘pumpernickel’.

This site uses cookies. By continuing to browse the site you are agreeing to our use of cookies.AcceptFind out more